Historic Photos of Siege of Petersburg 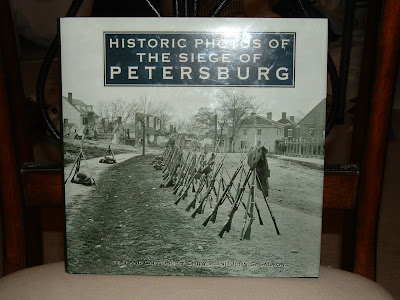 This book is broken down into four chapters; Besieging Petersburg, Behind the Union lines, In the trenches and From siege lines to park. The book follows the path set forth in the other Historic Photos books from Turner Publishing. There is a page or two of introductory text for each chapter followed by one big photo per page with a sentence or two for a caption. I’ve previously reviewed the Gettysburg edition (and will be reviewing the Chickamauga-Chattanooga book tomorrow). I think all three are good books although I would rate the Petersburg edition as the weakest of the three.

I think its the weakest of the three because of one chapter in particular. The chapter “Behind the Union lines” is basically a ton of photos of regiments and officers. One group doesn’t look horribly different than the next. I’d have preferred that this section had been greatly trimmed or removed completely. I did not feel that it offered much in the way of telling the story of the siege. There were some parts of it that I liked though. There were about six photos of the 50th New York Engineers. This regiment built the timber Poplar Grove church. I think it is amazing, and the other pictures of their camp show that these men built all sorts of buildings that had an artistic side as well as being functional.

The “Besieging Petersburg” chapter covers the Union preparations for the siege. This mostly shows the shear bulk of stuff gathered near City Point to continue the siege. I thought this was fascinating as it is one thing to read about the shear numbers involved and yet another to see the huge stacks of boxes, cannon, etc along the wharves.

I loved the “In the Trenches” chapter as this is where we are shown the battlefields and trenches of the campaign. Yes the trenches do start to look alike like I had complained about in the “Behind the Union lines” chapter but you can tell some differences and the captions explain the areas pretty well too.

In the final chapter, “From siege lines to park,” we see Petersburg. There are some pictures of the houses that served as headquarters and some pictures of the destroyed areas of town. I would argue that this chapter though is improperly titled as we see little of “the park.” In fact there are only six pictures at the end that show anything of the park. One of these shows President Taft on the steps of a house when he came to visit in 1909 and another shows the 1936 auction of 128 acres at the Crater. Were there so few pictures of the park from the last 100 years that this is what we were left with?

For the lack of park pictures and the over abundance of the regimental and officer pictures I rate this the weakest of the three Civil War volumes in the Historic Photos books from Turner Publishing. I do think though that it is a good book. I do not remember seeing this many photos of the siege of Petersburg gathered before in one place.
Posted by Nick at 8:20 AM