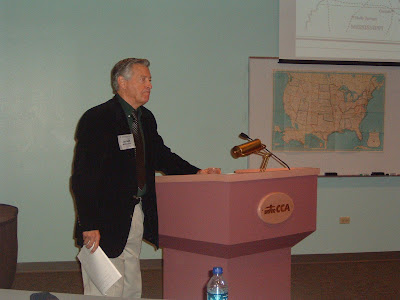 James Lee McDonough started our day off with an overview of the Western Theater. He started it with all sorts of data about the two sides and I was starting to wonder where he was going with it. One thing he said which I had never heard (or don’t remember it) is that Missouri had the second highest white population in 1860 among slave states, only trailing Virginia and if you subtracted West Virginia it was first. Kentucky was third. His point being that if those two slaves states could have been firmly in the Confederacy it would have been a huge boon in manpower alone. He also talked about some of the natural resources these two states would have been able to contribute too.

Something else I had never thought about is that the Confederacy was roughly twice the size of the colonies of 1776. One of the reasons the British lost that war was because fighting on that scale is difficult, not only in space but everything that goes along with it (logistics being the major consideration). Of course since then numerous railroads had been built and the river system in the West favored the Union. But even so there was some belief that the size of the project might be enough to prevent the Union from winning.

He also went into Kentucky’s geographic importance. I’ve heard this before, but to paraphrase a Confederate Kentucky makes invasion of the West more difficult because the Ohio River forms a natural defensive line and would prevent the Union from exploiting the Cumberland and Tennessee Rivers (at least until they breached the forts that would likely be built at the confluence of each of those with the Ohio.

He also made two statements I found interesting discussion fodder. One is that Shiloh was a “narrow tactical victory with major strategic importance.” I don’t have a problem with that statement at all, I think it fits, but I can see that others might not agree. The other is, “If the Kentucky line [the reality line thru Bowling Green not the imagined line on the Ohio] was intact at the time of Antietam would that battle have as much importance, would Lincoln issue the Emancipation Proclamation?” His point being that nothing about Antietam makes it vastly important than that the Emancipation Proclamation follows. I’m not so sure about this one. I can understand that the situation would then basically be a small Union foothold throughout all theaters but Antietam would still have significance as an invasion turned back. I don’t know if that would be enough of an event for Lincoln to issue the Emancipation Proclamation, but since he probably still had it in a desk drawer waiting for his moment me might have seized on this event as the big moment again.