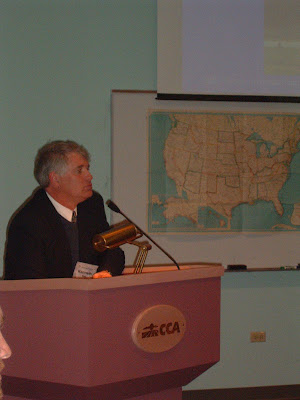 Kenneth Noe provided one of the better jokes of the event. In leading off his talk he said that he was from Virginia and there they “know that the war was fought in Virginia, with a few days in Maryland and one bad week in Pennsylvania.” Noe is also a Cleveland Browns fan and said his heart broke when he drove past Mile High Stadium where his Browns lost two AFC Championship games (its now Invesco Field but the new stadium sits next to where the old one was).

But on a serious note Ken talked about the Perryville campaign. I thought he did a very good job of laying it all out. He got a little into the blow-by-blow stuff but not so much that your head is swimming with details. I especially liked how he detailed the various options available to Bragg at the beginning of the campaign and how the boldest option somehow became the best option. One of his gems of insight was when he said that it impossible to understand the Civil War if you separate the military, political and social elements. That they are all connected, in fact these separate forces are what ends up pushing Bragg to select the option he does select (instead of swinging from Tupelo to Chattanooga and then north into Kentucky, he could have struck Buell between Corinth and Chattanooga or he could have assaulted Corinth directly).

Ken also talked a bit about how weather played such a huge role in this campaign, as well as the other campaigns of 1862 in the West. He said that if he was doing the book now he’d try to explain the toll of drinking very little water (and then having substandard water when it was available) had on the soldiers and animals of both armies.

I’ve read his book, and have tramped those fields. As a sign of how well his talk was received by the rest of the audience, as soon as his talk was over his book sold out from our book room. I was glad to hear about that as I knew it meant we made a good choice in selecting him as a speaker.

A theme that kept popping up during the day was memory, and Perryville is no exception to the memory debate. In Perryville’s case its a matter of how a pretty major battle somehow falls out of the public memory. Perryville started to disappear from the newspapers right away as other events quickly filled the paper, things like the battles of Iuka and Corinth, the fall Congressional elections and the debate of the preliminary Emancipation Proclamation. Then after the war it remained a lesser battle. But the locals have worked hard to protect it. They have done their best to prevent it from being changed, and last week they actually did so again by rejecting a request from a developer to build many homes.
Posted by Nick at 7:48 AM

Thanks for posting these summaries of the various talks at the Symposium. I enjoyed reading all of them. Ken Noe and Timothy Smith are two of my favorite Civil War authors. Tim's book on Champion Hill and Ken's on Perryville are model battle battle studies.

Wanted to see if you were going to leave your comments regarding the other two speakers?